One of Canada’s National Historic  Sites, the Triple Island Lighthouse, is to receive a complete heritage rehabilitation.  RATIO has been commissioned to lead the design including a seismic upgrade and overall building refurbishment. Mike Mammone, RATIO principal, recently made a site visit and took these stunning shots from the helicopter and ground. RATIO’s work on this project is already underway with construction commencing this spring.

Triple Island Lighthouse, 22 nautical miles off the coast of Prince Rupert, British Columbia, is a manned lighthouse built in 1920.  It’s simple classical design, located on a rugged, rocky, windswept island was designated a National Historic Site of Canada in 1974 because of the achievement of its construction on such an exposed site.  The National Historic Site of Canada’s description: “The Triple Island Lighthouse stands sentinel on an exposed, rocky islet off the coast of British Columbia. The concrete, octagonal tower rises from the northeastern corner of an unornamented, square-shaped keeper’s dwelling and fog alarm building. It is a simplified, well-scaled, classical design occupying a large part of Triple Island. The strategic location makes it highly visible to maritime traffic. The official recognition refers to the building on its rocky island.” 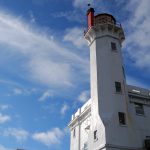 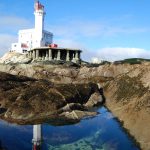 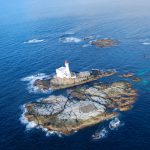 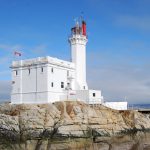 RATIO has worked on many award-winning heritage restoration and redevelopment projects.  Notable is the Britannia Mine Museum and the Britannia Heritage Shipyards, both National Historic Sites of Canada.

Links to more about the Triple Island Lighthouse:

About the Triple Island Lens